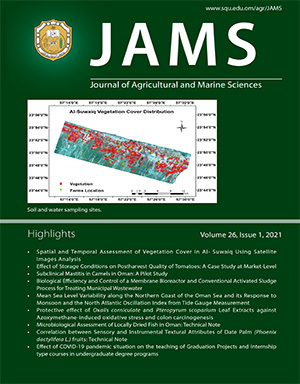 Digital change detection techniques using multi-temporal satellite imagery helps in understanding landscape dynamics. The present study assesses the spatial and temporal dynamics of vegetation cover change in the coastal wilayat of Al-Suwaiq, Sultanate of Oman using field and remote sensing data. The study was conducted at various distances from the coastline, considering the variability in soil and water salinity. Normalized Difference Vegetation Index was calculated using the Landsat 5 TM and Landsat 8 OLI satellite images and classified into three main classes to evaluate the monthly and annual vegetation cover change between 1987 and 2016. Soil and water samples were collected during the cultivated season in Al-Suwaiq and analyzed mainly for salinity. Vegetation cover maps showed a general shift in vegetation biomass from regions closer to the coast (north-side) as water salinity increased with time. Between 1988 and 1999, vegetation cover increased by 7.7%, whereas it declined by 1.5 % in the study area along the coast. However, between 1999 and 2016, the vegetation cover decreased further by 5% along the coast while increasing by 12.2% farther from the coast. The largest increase in the area was for vegetation covers falling within the moderate (0.33-0.67) and high (0.67-0.86) NDVI classes. In conclusion, vegetation cover in Al-Suwaiq reduced along the coastline and shifted agriculture activities and increased cultivation from the North to the South of Wilayat. Therefore, agriculture activities on the Southside of the Wilayat should be controlled to prevent further degradation of water quality and its possible effect on agricultural farmlands.