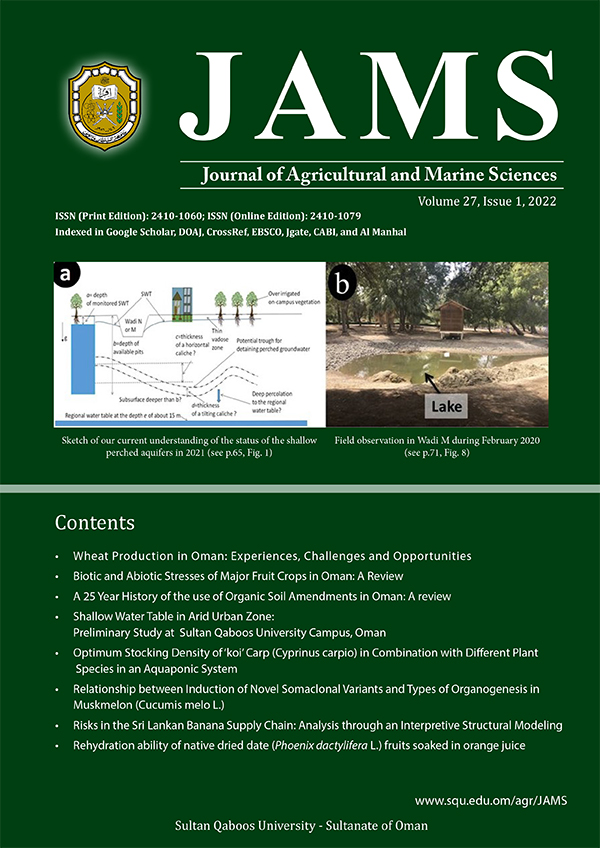 A shallow water table (SWT) rises up to several centimeters below the soil surface and even exfiltrates making surface impoundments that are common in humid climates. Recently, SWTs emerged even in arid and semi-arid regions of several metropolitan areas of the Arabian Gulf Cooperation Council (GCC) countries with a pernicious impact on the urban infrastructure, health, ecohydrology of parks and gardens, among others. Quantifying SWT’s dynamics and understanding the associated phenomena of water motion and solute transport are vital for finding the proper mitigation techniques and reducing the risks associated with SWT. In this preliminary study, SWT was delineated, its seasonal dynamics was monitored, evaporation losses were quantified, and groundwater chemistry was measured at Sultan Qaboos University (SQU) campus (Oman). The study sites were near the building of the College of Nursing (Wadi N, 4 soil excavations thereafter indicated as S1, S2, S3 and S4) and near the SQU Mosque (Wadi M, 3 locations were labeled 1,2 and 3). Field measurements of SWT in soil excavations, laboratory analysis of collected groundwater samples, and numerical simulation of evaporation using HYDRUS-1D were conducted. The results showed that the water table depth in all excavations in Wadi N increased during June compared to January-March by 24 times (from 0-6 cm to 130-145 cm), while the water salinity increased by 50% (from 4,563 mg/L to 9,164 mg/L). Unlike Wadi N, the water table in Wadi M remained steady (within 4.5-6 cm), while the water salinity of the locations 1 and 2 increased by nearly 40% to 22% (7,948-13,632 mg/L and 7,372-9,075 mg/L), respectively, whereas it decreased by nearly 30% in location 3 (from 9,177 to 6,374 mg/L). These variations in water chemistry suggest that the studied SWT is patchy and caps perched aquifers, which are likely to be disconnected hydraulically from each other and the regional aquifer located at the depth of about 15 m under the local ground surface. Considering the seasonal variation in weather conditions, the results of HYDRUS-1D simulations showed that the evaporation rate in June was higher by about 50% than that for January-March. The discharge from the water table due to evaporation from the whole area of Wadi N was estimated by the model to be around 6600 m3. Further studies should determine the source of groundwater that would make possible a hydrological balance for perched aquifers. This would drilling and installing nested piezometers with regular record of SWT and regional groundwater, geophysical surveys of the subsurface, detailed analysis of soil pedogenesis and morphology of the vadose zone, isotope analysis of groundwater, and detailed numerical simulations of groundwater and soil moisture motion.