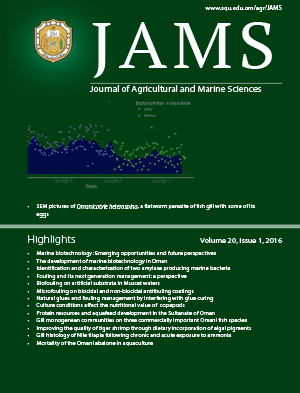 Macro-fouling communities developed on acrylic, aluminum, wood and fiberglass panels were investigated after 4 months exposure in Marina Bandar al Rawdah and Marina Shangri La. Wet weight of biofouling was about 2-fold higher in Marina Bandar Rawdah and different communities were formed on the front and back sides of the panels. Differences between communities on different materials were less pronounced. In the second study, wet weight and community composition of macro-fouling communities on ceramic tiles at the depth of 1 m and 5 m in Marina Bandar al Rawdah were investigated. During 2008 – 2010, there were no differences between biomass of communities, while in 2011 biomass of macro-fouling was higher on tiles at 5 m. In December 2008 the minimal weight (0 kg/m2) and in September 2011 the maximal weight (26.3 kg/m2) of macro-fouling communities were recorded. In total, 27 invertebrate fouling species were found, which mostly (33%) belonged to phylum Ectoprocta. Three invasive bryozoan (Bugula neritina, Zoobotryon verticillatum and Schizoporella errata) and one invasive tunicate (Ciona intestinalis) species were observed. Overall, this study indicates high biofouling pressure in Muscat marinas and suggests necessity of future studies of fouling communities in Oman waters.