The Psychological Impact of Referral for Mammography Screening for Breast Cancer Among Women in Muscat Governorate: A cross-sectional study 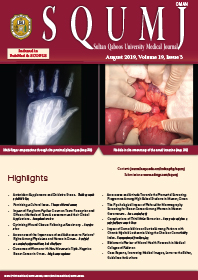 Objectives: Breast cancer constitutes the majority of diagnosed cancers in Oman’s females, accounting for 19.2%, which prompted the introduction of a breast cancer screening programme into the Omani healthcare system. There are rising international concerns about the effectiveness of mammography as a screening tool and its psychological impact. The current study aimed to determine the social, emotional and physical dysfunction caused by the waiting time from the day of scheduling the appointment until the day of screening and explore associated risk factors. Methods: This cross-sectional study was conducted between March and December 2017 at Khoula Hospital, Muscat, Oman, using a two-part self-administered questionnaire. Part one of the questionnaire collected clinical and demographic data. Part two consisted of the Psychological Consequences Questionnaire (PCQ) and focused on psychological consequences, measuring the effect of mammographic screening on emotional, physical and social functions. Results: A total of 300 women aged ≥40 years old participated in this study (response rate: 100%). Results revealed that there was a minimal negative psychological impact from screening using mammograms. All PCQ domains were significantly impacted for participants who reported a family history of cancer (P = 0.007). The social score was significantly higher among women between 40–50 years old (P = 0.008). Scores of emotional and social functions were significantly affected by participants’ employment status; employed women were more affected than those who were not (P = 0.043 and 0.012, respectively). However, women’s levels of literacy did not affect any of the domains. Conclusion: The psychosocial impact of the waiting period between scheduling and undergoing mammography screening was minimal in the current sample. Future research should evaluate the psychosocial impact on patients at different recall times.