Effect of Khat (Catha edulis) Use on the Bioavailability, Plasma Levels and Antimalarial Activity of Chloroquine 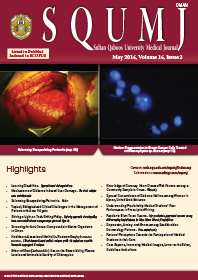 Objectives: This study aimed to evaluate the effect of khat (Catha edulis) on chloroquine (CQ) bioavailability in healthy Yemeni adults and its effect on CQ plasma levels and parasite clearance among malaria patients. Methods: This study took place between January and April 2007 in Bajil and Sana’a, Yemen. Two CQ doses (600 mg each) were given to 15 healthy males on separate occasions; the first dose was followed by a khat-chewing session (phase one) while controls abstained from khat-chewing for the second (phase two). Additionally, 103 patients with Plasmodium falciparum-induced malaria, including both regular khat chewers (n = 57) and non-khat chewers (n = 46), were treated with CQ (25 mg/kg) over three days. Pharmacokinetic parameters were analysed among both controls and malaria patients. Parasite clearance was also investigated for the latter group. Results: The mean area under the concentration-time curve (AUC) was 2,108.9 versus 2,797.4 ng/hour/mL, mean peak plasma concentration (Cmax) was 415.6 versus 508.7 ng/mL and mean time to reach Cmax was 3.8 versus 3.6 hours for controls in phase one versus phase two, respectively; both AUC and Cmax levels were significantly reduced by khat-chewing (P <0.050). For khat- versus non-khat-chewing malaria patients, mean plasma CQ concentrations were 266.4 ng/mL versus 427.5 ng/mL (P <0.001). Furthermore, CQ was effective in 71.7% and 75.4% of non-khat and khat-chewing malaria patients, respectively (P = 0.823). Conclusion: Khat-chewing was found to significantly reduce plasma CQ levels among healthy volunteers and malaria patients. While receiving CQ treatment, patients should be advised not to chew khat.

You may also start an advanced similarity search for this article.