Barriers and Perception Towards Spectacle Wear among Student Population of University of Buraimi, Oman 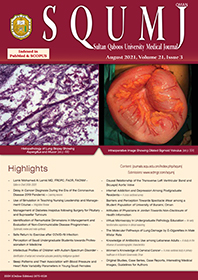 Objectives: The study aims to evaluate the barriers and perception towards spectacle wear among student population of University of Buraimi, Oman. Methods: This descriptive, questionnaire based, cross-sectional study was conducted between December 2017 and May 2018.  To evaluate participant’s barriers and perception towards spectacle wear, a self-designed, validated questionnaire prepared in English language, obtained responses from 170 a university student population within the Sultanate of Oman. Chi-square test was used to assess the association between the type of perception with the socio-demographic and refractive error related profiles of the participants. Results: All participants with inappropriate spectacle correction (61.82%) responded to the questionnaire.  Majority of them (73.5%, n = 125) were having their eyes examined for the first time. Only 28 (16.5%) were wearing spectacles. Nearly half of the participants (54%, n = 91) had positive attitude towards spectacle wear, followed by negative (36%, n = 62) and neutral perception (10%, n = 17). Participants from a health science background had a higher positive perception towards spectacle wear compared to the non-medical study majors (P = 0.012). The difference in the perception scores between myopic and hypermetropic refractive error group was statistically insignificant (P = 0.882). Conclusion: A majority of the participants were having inappropriate spectacle corrections and did not undergo any prior ocular examinations. Very few participants were wearing spectacles, however, it was inappropriate concerning their current refractive status. The other reasons for spectacle non-wear were, ordering of new spectacles, lost them, or were broken. Nearly half of the participants had positive perceptions towards spectacle wear. The positive perception was higher among students with health-related majors. The study stresses to extend the current school eye health initiative within the region to the university level. A holistic eye health promotional approach integrating students, teachers, and parents can help in improving spectacle wear within the population.