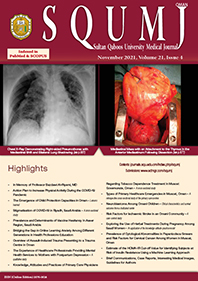 Objectives: A limited number of publications from the Middle East have focused on neuroblastoma, a common childhood malignancy. This study describes the clinical characteristics and survival outcome of Omani children with neuroblastoma treated at the National Oncology Centre, Oman, between 2010 and 2017. Methods: From January 2010 to December 2017, data on Omani children aged less than 13 years with neuroblastoma were retrospectively collected. Survival data were statistically correlated with known prognostic factors, including age, stage of disease, MYCN profile and presence of metastasis. Results: A total of 56 Omani children were included. in this study. The male to female ratio was 1:1. The mean age at presentation was one year and 10 months. The two most common presenting complaints were body masses (48.2%) and constitutional symptoms (33.9%). Approximately, 54.5% were high risk, 35.7% were intermediate risk and 9.8% were low risk. High-risk neuroblastoma was mainly found in children older than one year (76.6%), with low risk mainly observed in children less than one year of age (80%). The overall survival of all groups combined was 74% (P <0.05); the event-free survival (EFS) was 67% (P <0.05). The overall survival rates over five years for the high-risk, intermediate-risk and low risk groups were 60%, 88% and 100%, respectively, and the EFS was 51%, 79% and 100%, respectively. Conclusion: Omani children with neuroblastoma mainly presented with masses or constitutional symptoms and had an advanced disease at presentation which was associated with inferior survival. The survival outcomes were reasonably similar to published international data.